A handcrafted guitar paired with complex acoustics measurements; the art of sound and the science of sound. All of these elements came together in a research project involving the research expertise and resources of Penn State’s acoustics facilities and the talent and tradition of Martin Guitar—an iconic 6th generation family business in Pennsylvania.

Micah Shepherd, assistant research professor of acoustics, and a team of Penn State acoustics experts worked with Martin Guitar to develop a method to analyze acoustic properties of guitars and components—to understand the science behind the variance in sound produced by different guitars and guitar components.

Acoustics, the science that deals with sound waves and vibration, has long been an area of strength at Penn State. Expertise in acoustics is a core competency of the University’s Applied Research Laboratory (ARL), one of the top defense-related research labs in the nation. The College of Engineering’s Graduate Program in Acoustics dates to 1965, and remains the only program in the U.S. that offers a Ph.D. in the subject. The interdisciplinary Center for Acoustics and Vibration fosters partnerships with industry, bringing all that expertise to bear on practical problems.

The Applied Research Laboratory (ARL) at Penn State, is an integral part of the University.

Established in 1945 at the request of the U.S. Navy to focus on undersea weapons technology development.

ARL now has a broad research portfolio, including fluid dynamics, acoustics, materials and manufacturing, and undersea systems to address needs of various sponsors.

Faculty and students throughout Penn State are working with businesses and industries by applying research principles or new technologies to help them solve complex problems and challenges. These types of partnerships are an area of focus at Penn State and an example of the University’s continued commitment to supporting economic development.

Innovation might not be the first thing that comes to people’s minds when they think of C.F. Martin & Co.® As it happens, the family-owned guitar maker, in Nazareth, PA, has been making acoustic instruments since the 1830s and has always relied on a balance of tradition and innovation to remain the most sought-after acoustic guitar brand in the world.

Martin guitars have been played by a who’s who of top recording artists spanning generations and genres. Guitar fans speak reverently of the distinctive Martin sound.

Martin pioneered advances in guitar size and structure that are now industry standards. “Their factory in Nazareth is a really cool mix of modern manufacturing technology and an ancient art,” says Shepherd.

“Ultimately, that’s the goal,” says Josh Parker, a Penn State alum and research and development technician at Martin. “To use tradition and innovation to build the best guitar possible.” Partnering with Penn State is one example of the ways in which Martin continues to innovate. 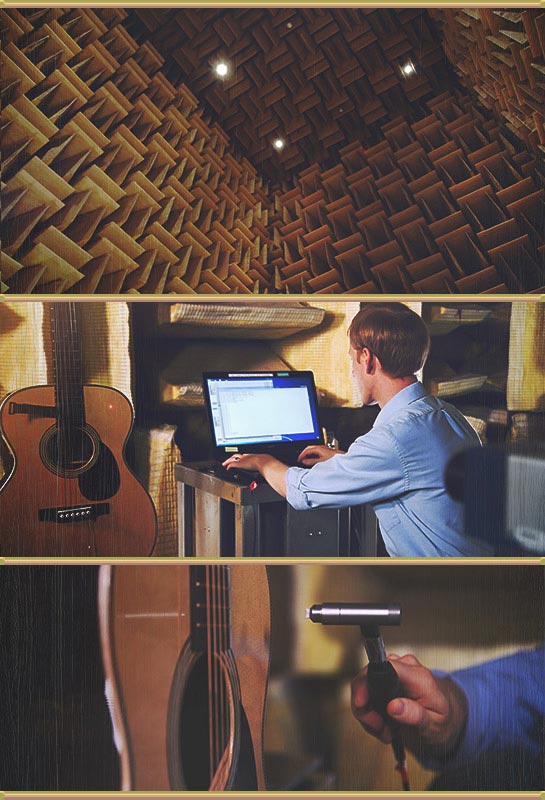 Micah Shepherd in the anechoic chamber demonstrating the testing used to determine the vibro-acoustic fingerprint for a Martin Guitar.

“What we could offer was a supplement to their current evaluation process–a tool that provides quantitative data and allows them to evaluate whole guitars, as well as guitar components.”

When ARL’s Dave Swanson toured the Martin factory a few years ago, it was natural that he would consider opportunities for Martin Guitar and Penn State to collaborate in the area of acoustics. Swanson, an avid guitar player as well as an acoustical engineer, approached Martin representatives to show them how Penn State could help Martin bring a scientific approach to evaluating the sound of its guitars.

“Their method of evaluation was qualitative,” says Shepherd. “They have talented musicians who listen to and score guitars on certain metrics—based purely on the sound. What we could offer was a supplement to their current evaluation process—a tool that provides quantitative data that allows them to evaluate whole guitars, as well as guitar components.”

Intrigued, Martin representatives brought several of their high-end guitars to ARL’s anechoic chamber, a cavernous sound-dampened room ordinarily used for testing submarine and aircraft components. There, Shepherd and others wired the instruments with shakers and sensors, buzzed them with white noise, and rapped them with force hammers, carefully measuring the ensuing vibrations. The data they collected established a “vibro-acoustic fingerprint” for each guitar.

“We’re interested in understanding the dynamic properties of both finished instruments and raw materials, and how that affects tonal qualities,” says Parker.

The Science of Sound

The project—applying Penn State research in a practical setting for an industry partner—fit perfectly with the outreach mission of the Center for Acoustics and Vibration. “These real-world applications of our research serve as a win-win for us as faculty members, our students, and our business and industry partners. Our work happening in the Center for Acoustics and Vibration is just one example of this type of collaboration happening throughout Penn State,” Shepherd says.

For Shepherd and his colleagues, working with musical instruments presented new challenges. Most of the Center’s corporate partners, he explains, are looking for ways to minimize vibration—reduce the noise in a helicopter’s cabin, for example, or limit the roar of a vacuum cleaner motor inside its casing. “Better means quieter, almost all the time,” he says.

In the case of a guitar, however, vibration is a good thing –and Martin guitars, in particular, are famous for their resonance. “I try not to classify tone as good versus bad,” Parker says, “because people like different things. But our guitars, especially our Dreadnoughts”—the company’s trademark large-bodied models–“are known for their loud, booming, very dynamic sound.”

“Working with musical instruments presented new challenges (for the acoustics team). Most of the Center’s corporate partners are looking for ways to minimize vibration–reduce the noise in a helicopter’s cabin, for example. In the case of a guitar, however, vibration is a good thing—and Martin guitars, in particular are famous for their resonance.”

“Increased low frequency,” Shepherd would call that quality. In part, it is traced to the types of wood Martin has traditionally used: Sitka spruce for the top and rosewood for the sides and back. But, as a leader in environmental stewardship, the company understands the scarcity of these precious tonewoods and is always in search of sustainable alternatives. The trick, Parker says, is to find a combination that can match that classic sound.

Even within a given species, wood’s sheer variability came as a surprise to researchers used to working with metals and other engineered materials. “How you cut the wood, the grain, the moisture content, all of these things have to be accounted for,” Shepherd says. “They all affect the amount of vibration.”

“No two pieces of wood are exactly the same, which means no two guitars sound exactly the same,” says Parker. “That’s part of what makes a guitar great.” To complicate things even more, a guitar is what engineers call “a coupled system.” A change in any one of its interconnected components will impact the whole. 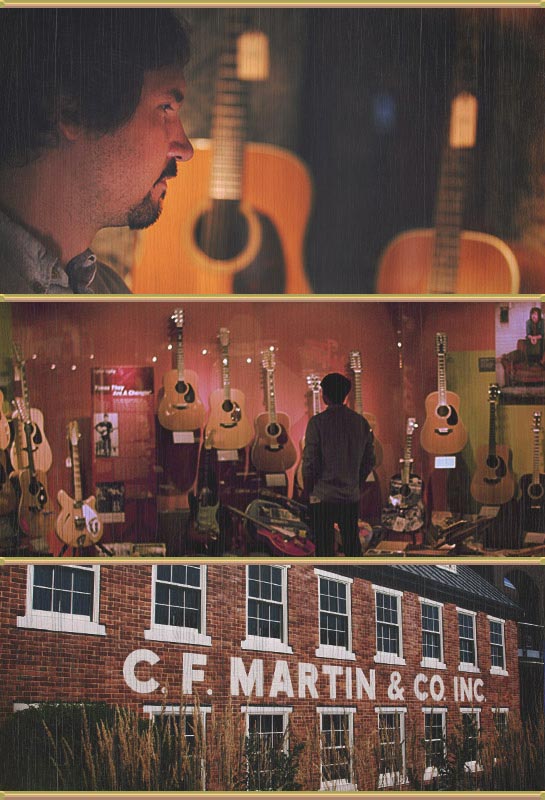 “It’s actually kind of mind-blowing, when you consider all the possibilities. It’s fun to think about how this kind of innovation can help move our design into the future.”

A Complement to Craft

After the initial evaluations at ARL, Shepherd and his colleagues put together a system to enable Martin’s sound engineers to continue testing on their own. That meant recommending the necessary equipment, advising on the set-up of a mini-anechoic chamber at the factory in Nazareth, and developing the custom software Martin would need to collect and process vibration data. Parker has been using the system ever since, not to replace the old qualitative approach, but to complement it.

Modal analysis has allowed him to compare Martin’s current line to competitors’ guitars, and, maybe more importantly, to the vintage instruments displayed in the company’s museum. Dating to the 1930s, these Pre-war Martins, as they are known, “are really that quintessential Martin sound,” Parker says. “This technology can help us as we try to replicate elements of that.”

He is also testing individual components, measuring the effect of substituting a mahogany top for spruce, say, or altering the shape of an internal brace. Soon he plans to start evaluating raw materials. The database he’s building, he hopes, will help guide design decisions as Martin adapts to changing circumstances.

“Eventually,” Parker says, “the idea is to be able to accurately model guitars on the computer.” And while both he and Shepherd know that a computer model will never replace the knowledge accrued over two centuries of craftsmanship, “It’s fun to think about how this kind of innovation can help move our design into the future,” he says. “It’s actually kind of mind-blowing when you consider all the possibilities.”

C.F.Martin & Co., a sixth-generation family-owned company based in Nazareth, Pennsylvania, is a corporate sponsor of Penn State’s Center for Acoustics and Vibration. 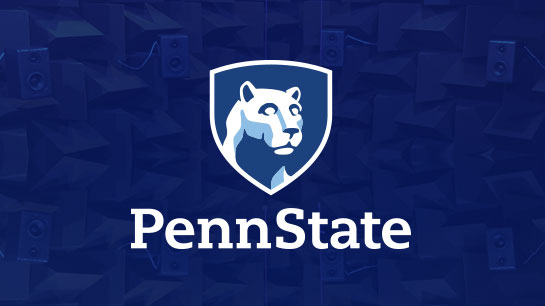 The Graduate Program in Acoustics at Penn State is a unique interdisciplinary program that offers a broad educational background applicable to a variety of scientific and technological fields. 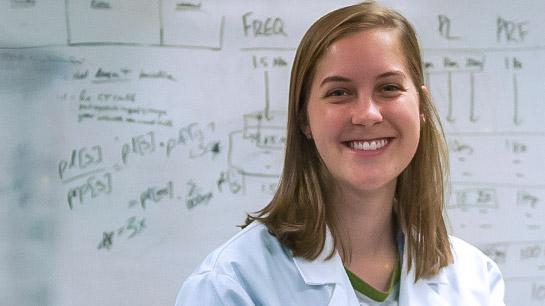 In this Penn State News article, Molly Smallcomb, PhD student in acoustics, discusses her experiences in this unique program at Penn State.