Almost 34 million miles from Earth, Mars exists as the solar system’s next frontier for human space exploration. A team of Penn State researchers has accepted NASA’s challenge of designing an autonomous system capable of creating a human shelter on the red planet using 3D-printing technology. With the focus of the project on Mars, and research with a science-fiction-edge spurring the imagination to expand, perhaps the most profound application of their work is on Earth.

The team’s breakthroughs have opened the possibility to applying the technology to create sustainable housing options that could revolutionize the construction industry and address larger societal issues such as homelessness. 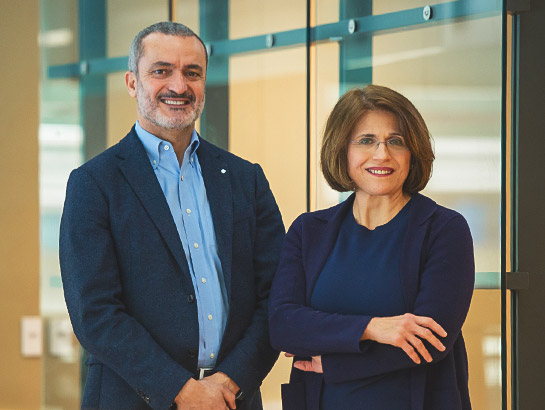 Led by Duarte and Nazarian, this interdisciplinary team includes students and faculty representing the Colleges of Arts and Architecture, Engineering, Agricultural Sciences, and the Materials Research Institute.

“As we discover solutions to the problems we face, we are realizing the enormous implications of this work. Mars is quite far away and while the possibility of sending this technology to space catches the eye, the reality of its uses on Earth are profound.

That is driving this work and the idea of having a dual mission—that is the spirit of Penn State.”

For nearly two years, the team has been competing in NASA’s 3D-Printed Habitat Challenge, a Centennial Challenges competition. The four-phase competition requires entrants to develop advanced 3D-printing technology, including the mechanical elements of the printer and a cement mixture using indigenous materials, to produce a structurally sound habitat that can be 3D-printed by NASA’s space explorers on Mars and beyond.

“Competing in the NASA challenge has been very exciting for all of us and it has brought together a team from across the University that represents the collaborative nature of Penn State,” Duarte said. “We have a vision and we are seeing it materializing with each breakthrough.”

The internal success enjoyed by the team has led to second place finish in phase two and second and third place finishes in construction levels one and two of phase three of the competition, which has generated nearly $300,000 in prize money. That funding, along with a grant from Penn State and in-kind contributions of materials and consultation from Autodesk, Gulf Concrete Technologies, and Tilcon, has helped the team navigate the challenges, which Duarte acknowledges are numerous.

But with each solution, another challenge presents itself. 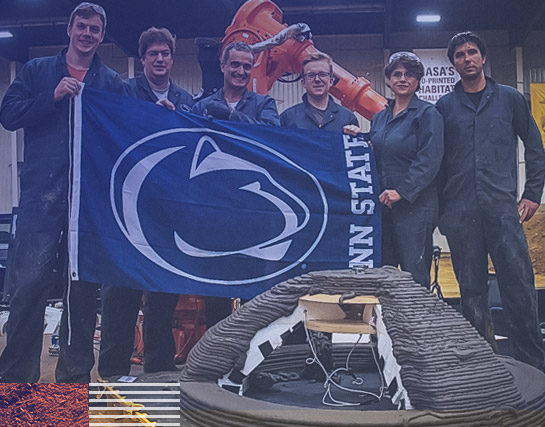 “Competing in the NASA challenge has been very exciting for all of us and it has brought together a team from across the University that represents the collaborative nature of Penn State. We have a vision and we are seeing it materializing with each breakthrough.”

Over the last decade, Penn State has been a leader in additive manufacturing research. The University’s commitment to advancing the technology has resulted in 3D printing labs on campus that offer a glimpse of the technology being explored by the team.

After a digital scanning process, a computer-guided robotic arm controls a nozzle that discharges a paste-like printing compound, made from various materials and filaments, that rapidly hardens to form the desired object. In its early form, the technology was used to create smaller objects, but as research has progressed the concept of 3D-printed buildings has emerged in the industry as an alternative to conventional building methods.

“The Mars competition has given us the opportunity to expand our understanding of 3D printing in ways we didn’t consider,” Nazarian said. “The result has been breakthroughs that can fundamentally change concrete construction. For example, 3D printing does not require formwork, which consumes much of the cost and labor in this industry. I’m excited about how this research helps advance the construction technology that is needed to create sustainable housing options,” Nazarian said.

Advancements in printing concrete structures has led to researchers gaining a firm grasp on how materials behave on Earth but applying the same techniques on Mars was uncharted territory.

Aleksandra Radlinska, assistant professor of civil engineering, brought to the team a wealth of research knowledge in the field of cement and concrete behavior and sustainability. She also brought the idea of shipping concrete samples to the International Space Station for a round of experiments and the industry connections to make it happen.

Twice in 2018, a rocket launched from NASA’s Wallops Island in Virginia carrying sealed packets prepared at Penn State. The packets, about the size of a plastic sandwich bag, have two sides—one containing water and the other containing the team’s 3D-printing cement mixture. The space station crew member slowly squeezed and agitated each packet until the two sides mixed and then more than 100 samples were sent back to Happy Valley.

“I’m excited about how this research helps advance the construction technology that is needed to create sustainable housing options.”

The results of the experiments have provided the team with a better understanding of how the materials might react on Mars, but to have a full understanding the team is in the early stages of building a small-scale machine that will be sent to the space station to conduct live printing experiments.

“We are dealing with an environment quite different than ours, but the challenges we have faced have revealed the strength of our team, which is the diversity of ideas and disciplines,” Duarte said. “We don’t view success individually. These are the team’s successes. These are Penn State’s successes.” 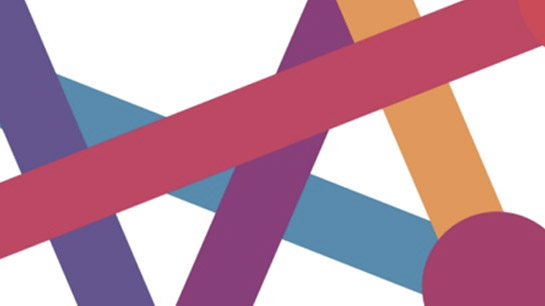 The Stuckeman Center for Design Computing is a multidisciplinary community of researchers exploring computation as a subject of creative and scholarly inquiry in design across scales and modes of engagement: from the territorial to the micro, from the theoretical to the material, and from the applied to the speculative and critical. The center’s projects variously engage architectural robotics, simulation and visualization, game development, geographic information systems, sustainable development, and digital fabrication, as well as historical and theoretical aspects of computation in design.