We inherit our skin color from our ancestors, and so it is obviously a trait that is tied to our biology and genetics. But what is it that brought about such a diversity of human skin colors? And how can knowledge about the natural history of skin inform questions surrounding societal notions of skin color and our health?

These are a few questions that form the basis for what Penn State anthropologist Nina Jablonski calls an explanatory framework of the evolution of skin pigmentation in modern human beings. It all began in the early 1990s when Jablonski began exploring gaps in the literature about the evolution of human skin and skin color.

Up until that point, Jablonski was known for her work in primatology and research on Old World monkeys. Shifting that focus not only resulted in fascinating discoveries about what makes us the color that we are, but a body of work highlighted by dozens of papers, two books, public education programming on the origin of skin color, television and radio appearances on NPR, PBS, late night talk shows, and a TED talk that has garnered more than a million views. 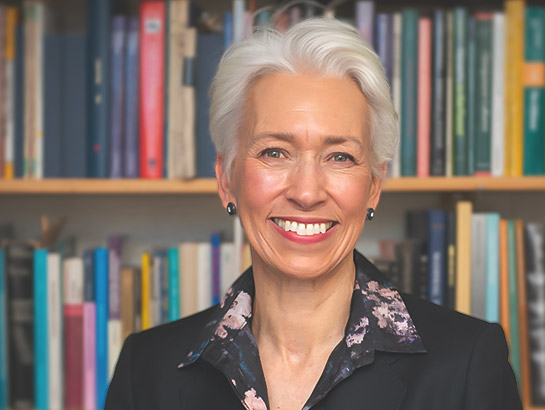 College of the Liberal Arts

WATCH
The Evolution of Skin Color

“My ultimate goal in this research is for people to understand that their skin color is a result of evolution. That’s it. Skin color has no connection to the evolution of other traits.” 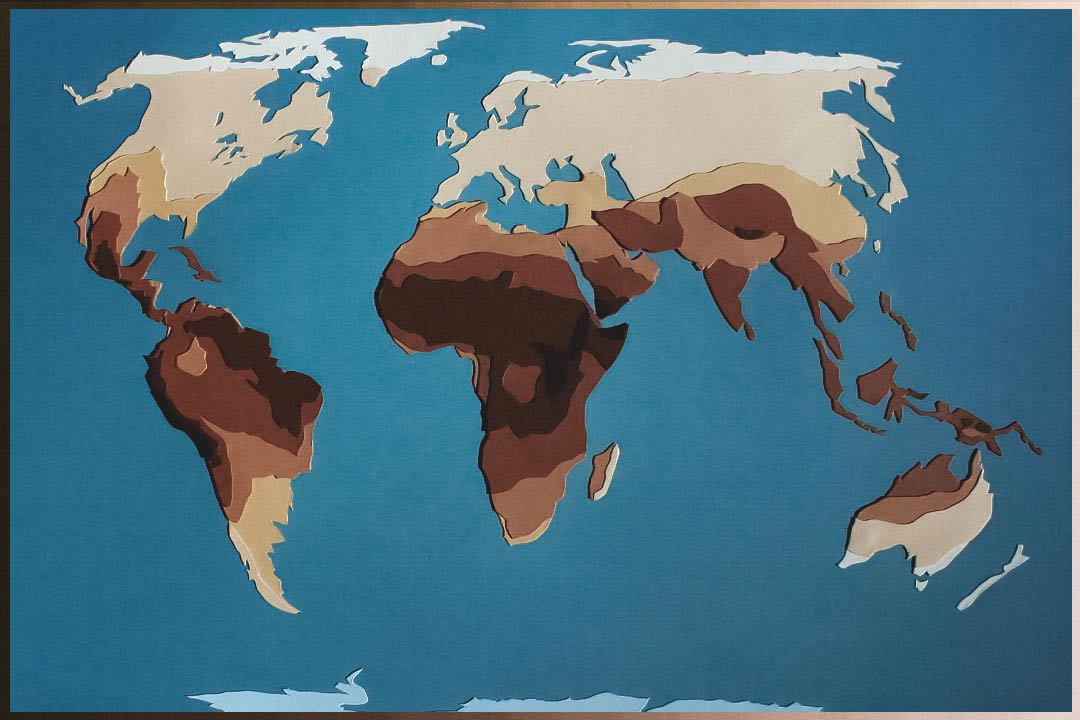 Artist’s rendition of a map created by Nina Jablonski and George Chaplin showing predicted skin colors of human natives of various regions based on levels of ultraviolet radiation from the sun in each region. Cut-Paper Illustration by Gail McCormick

In the early 1990s, the evolution of skin color was regarded by many of her peers as an intractable problem. Theory held that darker skin had evolved in order to afford early humans—who had recently lost the cover of fur—a protection against skin cancer under the tropical sun. But skin cancers, Jablonski knew, almost always arise later in life, when an individual is past reproductive age. Blocking their occurrence would offer little or no evolutionary advantage.

In a 1978 paper by two American medical researchers, Jablonski found evidence linking exposure to strong sunlight with low levels of folate, an essential B vitamin, in the blood. Other research tied folate deficiency in pregnant women to various birth defects. In men, she learned, folate is vital for sperm production.

These and other observations gradually led her and her husband and collaborator George Chaplin, Senior Research Associate in Penn State’s Department of Anthropology, toward a new hypothesis: that humans evolved the ability to produce melanin, the dark-brown pigment that acts as a natural sunscreen, as a way of safeguarding the body’s store of folate.

At the outset, then, living near the equator, all humans would have had dark skin. But that’s only half the riddle. Why and how did lightly pigmented skin come about? The answer, Jablonski reasoned, involves another key vitamin—and the history of human migration.

“I’m hoping this research gives people the appreciation that their bodies are the products of evolution. We’ve undergone evolutionary change just like the bodies of other creatures. And this evolution has implications for our health.” 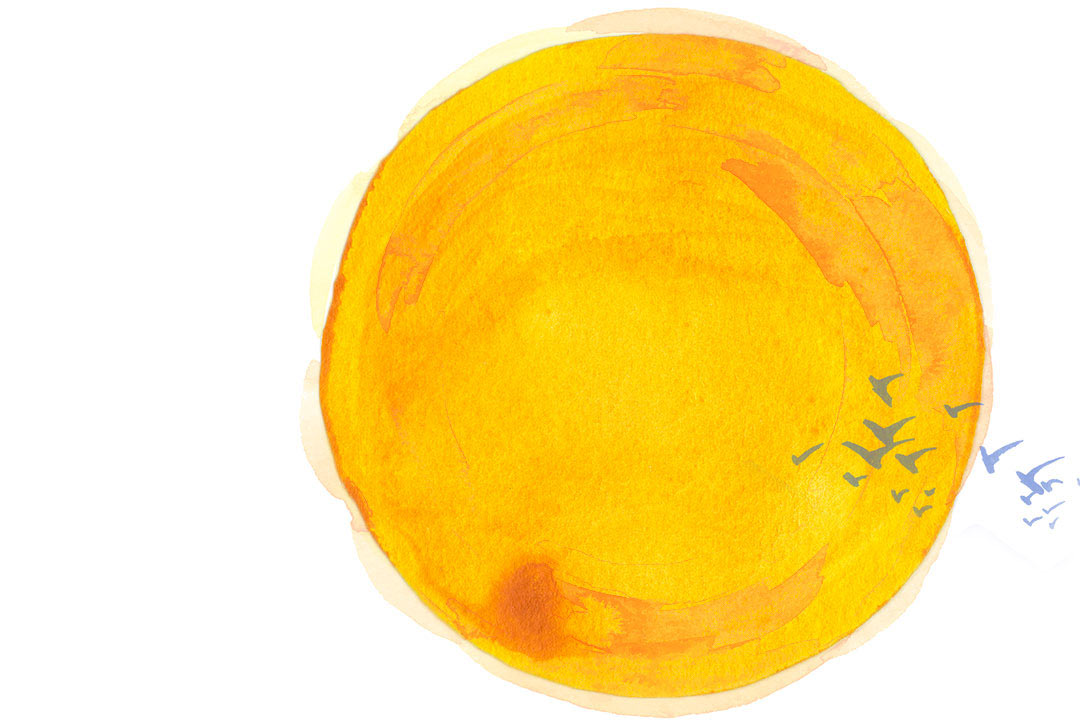 As Jablonski explains, the sun’s ultraviolet rays, in addition to causing cell damage and other forms of harm, play a vital role in human health: They trigger the production of vitamin D in the skin. Vitamin D, as most of us learned in elementary school, is critical for strong bones and healthy teeth. More recent studies show its value in immune function and for fighting off certain cancers and even heart disease.

In tropical climates, enough UV penetrates even dark skin to provide an adequate dose of vitamin D. However, as our forebears began to migrate, wandering far from the equatorial sun, not enough UV could make its way through the protective melanin. At higher latitudes, particularly in winter, vitamin D levels dropped, to the point where health was compromised. Dark skin became a disadvantage. The evolutionary response, Jablonski says, was a loss of pigmentation. Individuals with less melanin in their skin had a better chance of surviving where there was not as
much sunlight available.

In the late 1990s, Jablonski and Chaplin found support for this idea in a set of NASA satellite data, which provided a precise record of surface-level UV radiation at every point on the globe. When they compared these data with geographical records of skin color variation, they found an overwhelming degree of correlation. Skin color was darkest where surface UV was strongest, the overlay clearly showed, and lightest where surface UV was weak.

After ten years of digging, the two had arrived at what amounts to the first comprehensive theory of human skin color. What Jablonski calls “this beautiful sepia rainbow” evolved as a response to human migration, local UV regimes, and the body’s need for vitamin D.

“I’m hoping this research gives people the appreciation that their bodies are the products of evolution,” says Jablonski. “We’ve undergone evolutionary change just like the bodies of other creatures. And this evolution has implications for our health.”

“People want to know how they can help, and I think that speaks to the truly collaborative environment of Penn State from my colleagues all the way up to leadership. Their support and that willingness to be intellectually adventurous allows me to have greater impact.”

Since arriving to Penn State in 2006, Jablonski has not only found tremendous support for her research, but also in considering new ways to apply it.

Along with Harvard professor Henry Louis Gates, Jr., she has gathered a group of historians, artists, biologists, geneticists, genealogists, and educators to develop a curriculum that would bridge her work in the evolution of skin color to inviting students to consider who they are genetically, genealogically, socioculturally, and intentionally.

The result—the Genetics and Genealogy Curriculum Project— is aimed at middle-school-aged children and offers a curriculum that explores
personalized genetics and genealogy in the classroom as a way to get kids to connect with their heritage, while at the same time, creating an interest in science.

“The buy-in we’ve gotten from the University community, the Eberly College of Science, and across other colleges and academic units has been tremendous,” Jablonski said. “People want to know how they can help, and I think that speaks to the truly collaborative environment of Penn State from my colleagues all the way up to leadership. Their support and that willingness to be intellectually adventurous allows me to have greater impact.”

The program introduces students to key concepts in biology and evolution, human variation, and health using hands-on measurement and quantitative analysis and the visual display of their personal information. Students take on the role of the scientist in exploring their own genomes and heritage.

“If you really want to have an impact on people’s lives with something that truly matters to them, then you need to find ways to reach them in ways that make sense.”

“Kids want information and they’re very naturally curious about what they see around them,” Jablonski said. “They want to know where they came from, and why they look the way they do. Using the tools of modern genomics and genealogical reconstruction, we can reconstruct some of this precious history, and help students answer the question, ‘Who Am I?’ Our hope is that this experience will ignite a spark of interest in science that will burn throughout their lives.”

Given the nature of the curriculum and the social implications involved in discussing the evolution of skin color and race, it was important to Jablonski that the curriculum be truly useful and relevant—not only to the students, but to teachers, school administrators, and families as well. In piloting the curriculum, Jablonski and fellow instructors treated it as a research study—observing and taking notes on students’ reaction to the curriculum, initiating student-based reflection and interviews as a way to understand the true effectiveness of the program.

“This has been an important focus of my science and career—to make my research worthy and relevant to kids and their families,” Jablonski said. “As a scholar, there are of course the traditional ways of getting information out—academic papers and science journals—and that’s really important for scholarly grounding. But, if you really want to have an impact on people’s lives with something that truly matters to them, then you need to find ways to reach them in ways that make sense.”

For Jablonski, passing on this understanding of human skin color is what she hopes is a step toward greater understanding within humanity.

“The educational aspect is the tangible result of my research,” says Jablonski. “Learning about science and our place in nature can actually help in making the world a better place. And the journey is what engages them [the students]. When students realize they can investigate themselves, it’s truly exciting for them.” 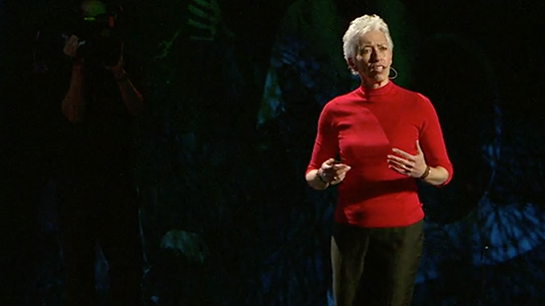 In Nina Jablonski’s TED Talk—which has been viewed more than one million times—she explores the origins of differing skin colors, their importance to our health, as well as how this research fits into anthropological history. 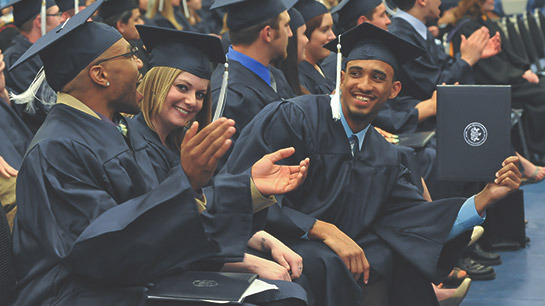 The College of the Liberal Arts at Penn State is one of the premier institutions in the world to study and work in the liberal arts disciplines, offering a traditional liberal arts education combined with digital fluency, global awareness, and assistance in making the transition from the classroom to a career.