Josh Maldonado-Santiago learned early on that nothing would ever be handed to him. From blue-collar beginnings in Bucks County, Pennsylvania, to the threshold of a Penn State degree and an officer’s commission in the U.S. Air Force, every success in Maldonado-Santiago’s life has been achieved through two guiding principles: hard work and sacrifice. 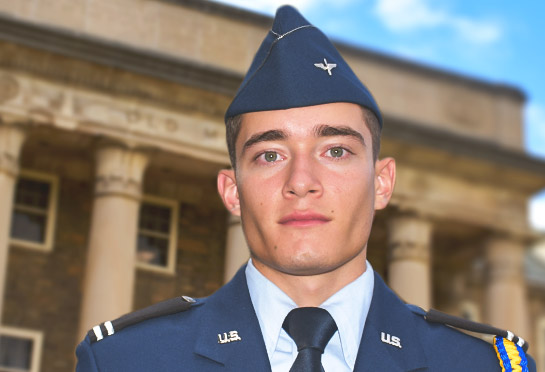 “Between Penn State and the military, I’m part of something bigger than I thought I would be. That’s a good feeling. I push myself so hard because I don’t want to lose it. I’ve come a long way to get where I’m at right now, and I’m not going to jeopardize it by slacking off.”

Working Hard for a Better Life

Coming from a small high school, Josh Maldonado-Santiago knew he wanted a large-school experience and the opportunities that come with it. He felt instantly at home when he visited University Park, and knew that’s where he wanted to be.

“It’s a very comforting and accepting community to be a part of,” Maldonado-Santiago said. “The first time I came here I fell in love with it.”

Growing up in Bristol Borough, about thirty minutes northeast of Philadelphia, the value of hard work was demonstrated daily by his parents, who left their native Puerto Rico to provide a better life for their young son.

“Something that was always brought up in my house is that there’s always a way. No matter what was going on, we always made things work.”

“Both my mother and my father were always working,” Maldonado-Santiago said. “The reason we came here to begin with was because my parents had me at a very young age in Puerto Rico. They were both in high school, and they actually had to drop out to make ends meet.”

Despite their strong work ethic, there were times Maldonado-Santiago wondered if his family would lose its home, and if there would be enough money for food.

“Something that was always brought up in my house is that there’s always a way,” he said. “No matter what was going on, we always made things work.”

Maldonado-Santiago grew up speaking both English and Spanish, but he struggled in elementary school and was frequently pulled from his social studies classes to receive extra help with his reading, writing and English.

“I remember one conversation I had with my dad when he was helping me with homework,” he said. “I wasn’t getting it, so my dad sat me down and said, ‘If you want to do better than what we have right now, then you’re going to have to sacrifice.’ Ever since then I have kept that on my shoulder, and slowly and progressively I got better.”

As a cadet, Maldonado-Santiago has excelled as a leader and a student, embodying the program’s core values of integrity, service and excellence—traits that led Penn State’s Air Force ROTC commander to select him for a Commanders’ In-College Scholarship. 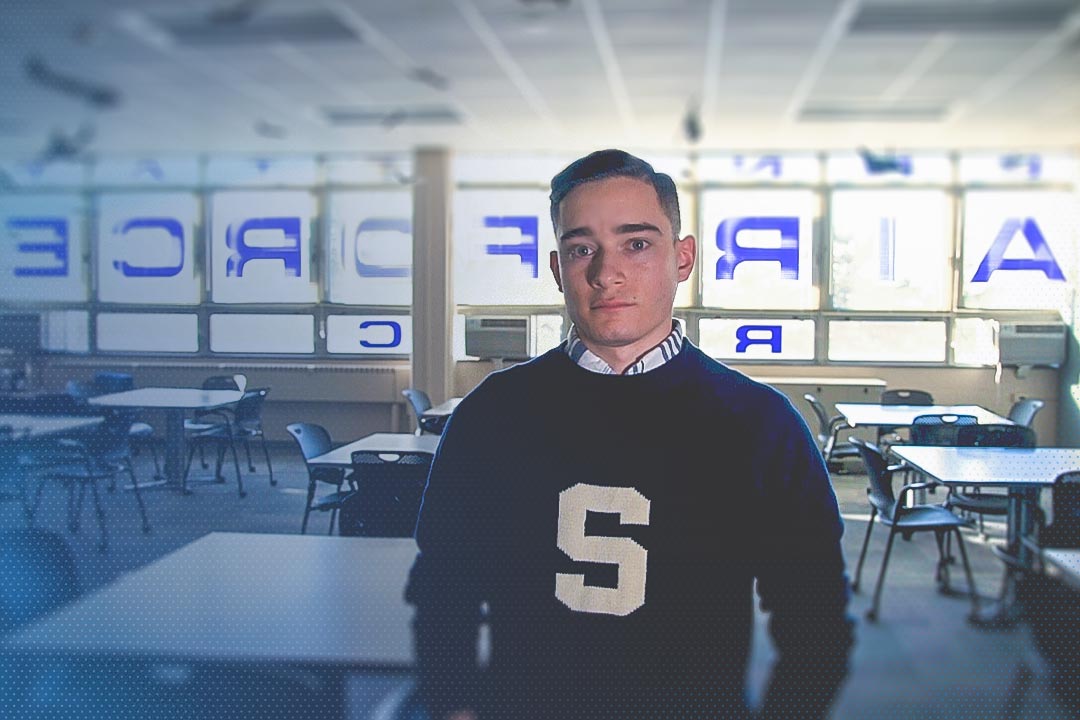 A Community in Which to Succeed

For Maldonado-Santiago, a life-changing event that coincided with his fifth birthday points to his decision to join ROTC: 9/11. Witnessing the events of that day inspired him to want to help prevent a similar tragedy in the future.

“I remember my mom turning on the TV, and the first thing that came up was the World Trade Center,” he said. “We watched the whole thing unfold right in front of us on TV. That’s always stayed with me.”

As a cadet, Maldonado-Santiago has excelled as a leader and a student, embodying the program’s core values of integrity, service and excellence—traits that led Penn State’s Air Force ROTC commander to select him for a Commanders’ In-College Scholarship, which is awarded to one cadet in the program annually and eased any worries he had about paying for college.

“Anything worth doing is worth over-doing. If you’re going to do something, give it 110 percent.” 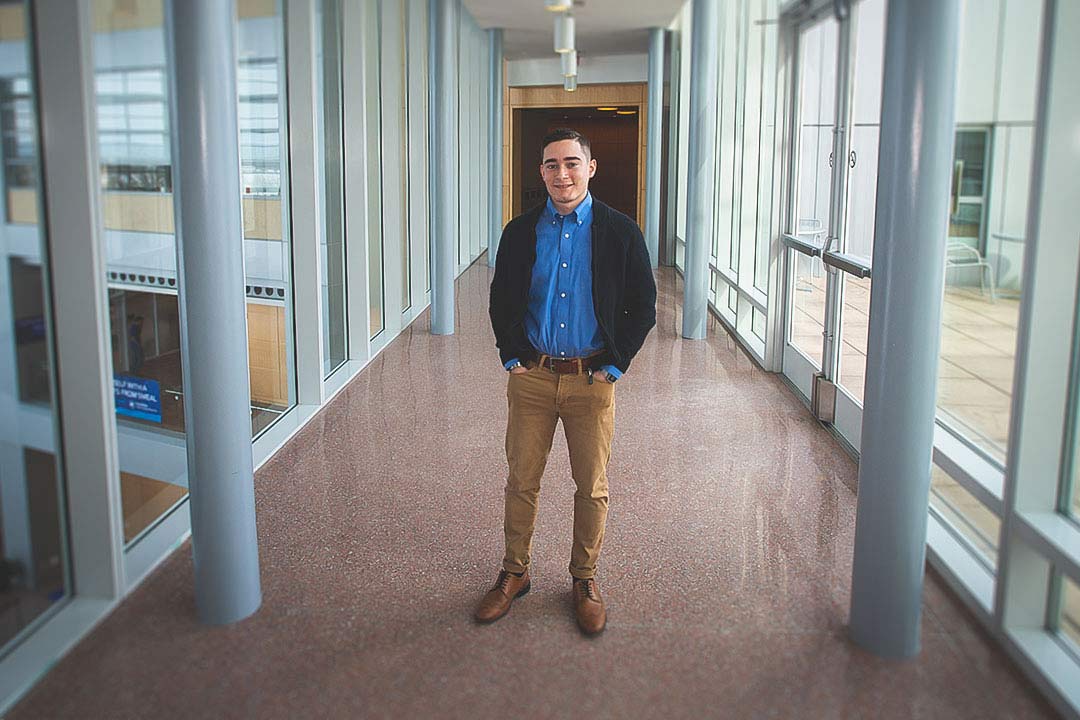 In addition to his student and ROTC responsibilities, Maldonado-Santiago finds time for a work study assignment in the Smeal College of Business.

“Anything worth doing is worth over-doing,” said Maldonado-Santiago, who, in addition to his dual ROTC responsibilities as a deputy squadron commander and a flight commander, finds time for a work-study position in the Smeal College of Business. “If you’re going to do something, give it 110 percent. I think to myself, ‘I’m going to be protecting the nation and its people. If I put myself in their shoes, what kind of person would I want defending me?’ That’s basically the moral standard I live by. How can I push myself so that I do better every day?”

Maldonado-Santiago worked to better himself this past summer via a study-abroad program in India. The opportunity, which took him to Delhi and the Himalayan foothills for six weeks as part of the Department of Defense’s Project Global Officer program, exposed him to the Hindi language and allowed him to build his leadership skills with fellow ROTC students from across the United States.

“It’s a cultural immersion where you’re trying to pick up the language, but it’s also to see how you react as a leader under different circumstances,” he said. “I was actually voted by everybody in the program to be the best team lead.”

Maldonado-Santiago’s study-abroad experience literally and symbolically showed just how far he’s come, as it brought full circle a family joke that started with his grandfather.

“There’s a running joke in my family that whenever they would go somewhere, someone in the family would ask, ‘Where are we going?’ and my grandpa would always say, ‘We’re going to the Himalayas! It was funny to see that joke, that impossible, it’s-never-going-to-happen joke, become a reality,” he said. 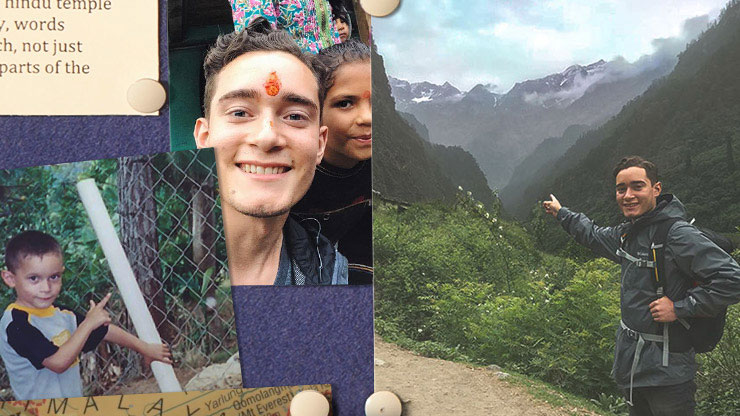 Maldonado-Santiago is on track to graduate in May 2019 with a degree in Telecommunications and a minor in Military Studies. Following his commissioning as a Second Lieutenant in the United States Air Force, he will begin his career with a one-year assignment as a Gold Bar Recruiter—one of only 30 nationwide—to recruit the next generation of Air Force Officers. Upon completion of this assignment, Maldonado-Santiago will begin training as an Air Force Acquisitions Program Manager, where he and his fiancée will begin their active duty service together. 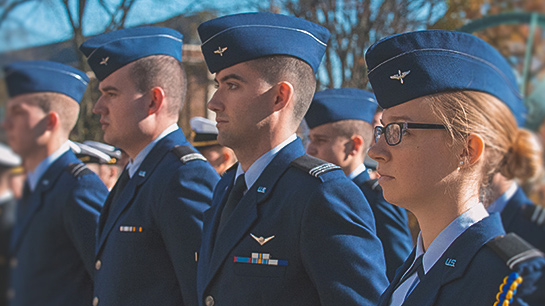 Air Force ROTC at Penn State is an educational program designed to prepare students for a commission while earning their baccalaureate degree. The Air Force ROTC program consists of general military and professional officer academic courses, Air Force leadership laboratory, field training, and physical fitness. The education and experience gained through the program prepares future Air Force leaders to serve their country in an exciting and challenging career. 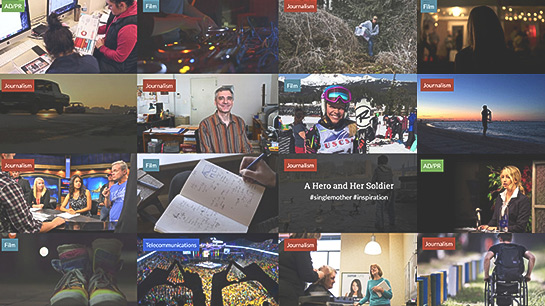 Recognizing the best learning environments are not limited to classrooms, the Donald P. Bellisario College of Communications uses a proven approach to help prepare students for success. As the largest accredited program of its kind in the nation, an emphasis on classroom instruction, campus media opportunities and career preparation represents the core of the educational philosophy. Faculty members blend strong academic and professional backgrounds and possess a commitment to excellence in teaching, research and service.